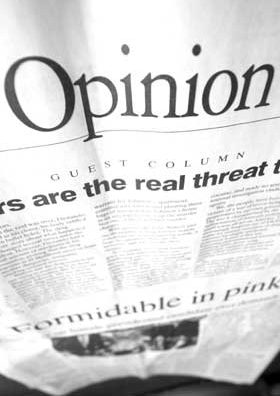 Opinion Page Opinion Page This page is dedicated to one man’s opinion. As Clint Eastwood so eloquently stated in Dead Pool – “Opinions are just like A******* everybody has one.” Everyone is welcome to agree, disagree, or state your own opinion. Just remember to be respectful. 4/9/2015 What is a hero? According to Webster’s Dictionary: He’ro n., pl. –oes 1. Brave, noble person, esp. a man 2. Central male character in a story It is interesting that the word hero lies between hernia and herpes. It is one of the most misused words in society today. Is a person automatically a hero if he chooses to enter a certain profession? For instance does joining the military or a law enforcement agency make you a hero? It has been proven repeatedly that there are a large percentage of law enforcement that chose that profession due to a familial responsibility or the lure of having power or being in charge. I have personally known dozens of people in law enforcement that were decent upstanding individuals that have no malice or self-serving interests in wearing a badge. I also can point to several hundred cases of abuse by police from the local patrolman to the head law enforcement official in the United States – Attorney General Eric Holder. After serving sixteen years on active duty which includes service during Vietnam and Desert Storm I have met and served with literally thousands of military personnel. The majority of them were good upstanding individuals that I was proud to serve with. However, once the going got tough a lot of these decent individuals were more interested in saving their own back-side than in possibly sacrificing for their country or their fellow soldiers. Case in point – when our unit was notified of our attachment to 1AD for deployment to Desert Shield/ Desert Storm the number of young soldiers that were heard crying on the phone to their families was unbelievable. Their mantra was that they only joined for the free college. Those of us that had served during Vietnam were left wondering if we would be able to keep these kids in line. There were even a number of individuals that went AWOL to avoid deployment. One piece of garbage left his wife and four children in Germany. He took off without telling them and went to the Frankfurt Airport and caught a plane to South America. The interesting part to this story is that after deployment the younger soldiers, for the most part, did their job to the best of their ability. The ones that gave us the most problems were the older higher ranking NCOs that missed Vietnam. I cannot count the number of infractions that were committed by the senior enlisted and the officers. From losing control and jumping off the top of an Armored Personnel Carrier and trying to strangle a younger enlisted man to covering up mass casualties – the list is long. Were there heroes there? Absolutely! Many of the soldiers performed in heroic fashion and deserved to be recognized. The problem with giving them recognition is that the people in charge would not allow any of the soldiers to receive an award that was at the same level of status that they themselves were to receive. Even those that were submitted for and deserved higher awards were downgraded to what the commanders felt was appropriate for their rank and not based on their accomplishments. Back to what a hero is – A hero is someone that sacrifices for someone else. That sacrifice can be in any form. My favorite is the man that sacrifices for his family. A truly great man that I knew in Germany was the epitome of a hero. Being from a working class family he started working at an early age. His parents put him to work and the income he brought in helped feed the family and allowed his younger brother to get further in school and secure a much better job then he would ever have. After he got married and had his own family he continued in the same manner. He worked day in and day out taking as much overtime as he could get to provide for his wife and three daughters. The thing that I remember and find most endearing is when the family sat down to eat he always made sure that everyone else got their fill before he would eat. More times than not everyone (but him) would get a second helping. Friends and extended family were always welcome and sometimes that meant that he didn’t eat at all. He spent his life in the role of provider making sure that his family had a roof over their heads and food on the table and in my opinion that is a HERO!