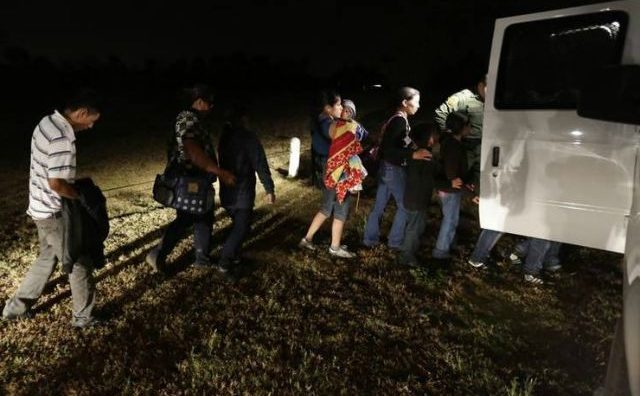 Report: Every Deported Illegal Household Saves Taxpayers More than $700,000 Report: Every Deported Illegal Household Saves Taxpayers More than $700,000 Julia Hahn Advocates for mass-migration are using skewed financial claims to smear Donald Trump’s popular border proposals, which actually would help revive the near-bankrupt Social Security and Medicare programs. For every illegal migrant household that leaves the United States under Trump’s plan, Americans would recoup nearly three-quarters of a million dollars ($719,350), according to 2010 data collected by Heritage scholar Robert Rector. The lifetime savings accrued from one deported illegal household would provide funds for 125 low-income inner city students to receive the maximum Pell Grant award in 2015-2016 ($5,775); it could cover the cost of pre-kindergarten for 90 at-risk children (around $8,000 per child); or it could cover the one year cost of Medicaid for 124 enrollees ($5,790 based on FY2011 data). But business interests want the migrants to stay. That’s because migrants help lower the cost of Americans’ wages, but also because the migrants spend their wages — plus taxpayer aid — at retail stories and rental agencies. For example, the American Action Forum (AAF), a business-backed pro-amnesty group, claims that legal costs and forced migration would spike the cost of Trump’s plan up to $300 billion to arrest and remove all illegal immigrants living in the United States. The AAF was founded by Fred Malek, who co-founded and chairs a hospitality investment company whose hotels employ many low skilled migrants. AAF’s cost projections have been trumpeted by many in the mainstream media such as NBC and Fox News. In reality, “a modest increase in enforcement (such as E-verify or visa tracking) would cause significant attrition in the illegal population– sending millions of illegals home on their own at no cost to the U.S. taxpayer.” said Jessica Vaughan, policy director at the non-partisan Center for Immigration Studies. There’s good evidence for Vaughan’s argument. “Arizona’s population of unauthorized immigrants of working age fell by about 17 percent” in the course of a single year, after the state began to enforce E-verify, according to the Public Policy Institute of California. The claim from Malek’s AAF also ignores the financial savings caused by the return of migrants to their home countries. Illegal migrants cost U.S. taxpayers a net total of nearly $100 billion annually, concluded a 2010 investigation by the Federation for American Immigration Reform. The 2010 report calculated the total contributions (mainly taxes) generated by the illegal migrants, and then subtracted the cost of taxpayer aid to those migrants. The aid includes education, subsidized housing, food stamps, tax credits, medical expenses. Overall, the report found illegal migrants cost taxpayers a total of $113 billion a year. The report then “accounts for taxes paid by illegal aliens [which is] about $13 billion a year, resulting in a net cost to taxpayers of about $100 billion.” Under the Trump plan, that spending could be used to reduce taxpayer spending. The resulting savings could fund the entire federal cost of major proposals by liberal Democrats, such as a Universal Pre-Kindergarten program. President Obama’s original 2013 proposal was projected to cost $75 billion over a decade. Or the government could allocate 60 percent more resources and benefits for returning American soldiers and veterans (increasing the President’s 2016 budget request for the VA from its current $168.8 billion to $268.8 billion) Alternatively, public schools could have the funds to employ an additional 1.9 million elementary school teachers to help teach young Americans in already-overcrowded schools. State and local governments could employ 1.6 million more police officers in to reduce crime in gang-besieged neighborhoods. These savings could the expand the government’s allotment for Emergency Shelter Grants, which provide support for the homeless or victims of domestic violence, by than 400 times its 2014 budget ($250 million). Upon first hearing the costs illegal migrants impose upon U.S. taxpayers, many find the figure difficult to believe, says Heritage’s Robert Rector: “The debate about the fiscal consequences of unlawful and low-skill immigration is hampered by a number of misconceptions. Few lawmakers really understand the current size of government and the scope of redistribution… Unlawful immigrants, on average, are always tax consumers; they never once generate a ‘fiscal surplus’ that can be used to pay for government benefits elsewhere in society.” Nations that are more serious about enforcing their immigration laws, however, are aware of the fiscal burdens mass migration places on its citizenry and have taken measures to combat economic strains. Israel, for example, has begun offering migrants $3,500 in cash and a one-way airplane ticket home in order to encourage repatriation.