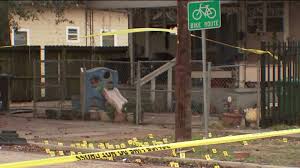 Texas Home Invasion Leaves Suspect Dead, Homeowner Injured…And A Community Defending The Criminals? Posted by Bob Owens on March 10, 2015 at 7:53 am Three criminals attempted to break into the home of Doug Hurst, 45, near Teague, Texas. Hurst heard the three home invaders kicking in his back door around 1:30 AM, and armed himself. At least one of the criminals were armed and fired at Hurst. Hurst was struck, but returned fire after being shot, striking one of the home invaders. When deputies arrived, they found Hurst seriously injured with a gunshot wound to the lower abdomen. He is is now in critical condition at a local hospital in a medically-induced coma. One of his attackers, Joshua Mulkey, 19, was found dead of a gunshot wound in the backyard of the home. The other home invaders, Lawson Abram and O’Jarion McClenon, were taken into custody within hours and charged with armed robbery. Both Abram and McClenon could be charged with Mulkey’s death under the “law of parties,” which is Texas’ interpretation of the felony murder rule. Another count of murder could be added if Mr. Hurst does not survive his injuries. As shocking as a violent crime like this is in a rural area where violent crime is said to be rare, the most stunning part of the story may be how the friends and family members of deceased robber/attempted murderer Mulkey are defending him in the comments of the ABC News article reporting the incident. Many friend and supporters of the dead robber seem intent on whitewashing the armed home invasion and attempted murder of the homeowner as just a “bad decision” or a “bad choice,” as if felony crimes are youthful indiscretions on par with sneaking out of the house or getting tipsy on beer taken out of the family fridge. Others are angry at those who say that the young criminal deserved his bullet, claiming that he didn’t deserve to die, and that people should be “respectful” of the dead criminal’s family in how they talk about him. Several have gone so far as to project a particular sort of fake Christian sentiment common in certain circles that the dead criminal shouldn’t be spoken poorly about for his actions, “because we are all sinners.” Perhaps not surprisingly, several have gone so far as to verbally threaten people who disagree with them. I’d note that this apparent acceptance of felony crime within the community that Joshua Mulkey was likely shared by him and his partners in crime. They clearly didn’t feel that felony home invasion, or attempting to murder the homeowner, was a serious moral wrong. At best they are paying lip service to the sentiment. It seems that much of the time—and probably a majority of the time—violent criminals are raised in an environment that is permissive and dismissive of criminal behavior by people coming from these communities. I can’t begin to imagine why that is, but as long as people continue to excuse felony crimes as mere “bad choices,” we’ll be digging graves for both the good and the bad. Previous Post Audie Murphy Biography Next Post NRA Forces Obama to Wave White Flag on Proposed Ammo Ban … For Now Related articles